Brandon seemed like a good dude. Not long after he completed his second flip he came out to another property I had under contract. Big project that I had some trouble moving. He ended up passing on that deal but we chatted about working together soon. He lives near Kalamazoo which is an hour and a half south of me. So we didn’t cross paths too often.

A week or so after our interaction I got a website lead from a seller in the Kalamazoo area. Normally I would make an effort to go meet the seller myself, but the timing was bad for me. We were expecting our 2nd kid and I had to be on standby in case my wife went into labor.

Brandon lived near Kalamazoo. Why not give him a call have him do the legwork for me? He had a couple flips under his belt so he must have experience on what to look for. Face to face meetings with sellers are important but you don’t necessarily need a highly trained salesperson using sleazy tactics to get a deal done. In fact, that approach is a turn off to most sellers. All that really matters is building rapport and being honest and genuine. From the brief interaction I had with Brandon he checked these boxes. Really I all needed him to do was gather info and take some pictures.

I gave Brandon a call. Told him I could use his help. Since he’s a flipper, I gave him the option to take it for himself if he liked it. Just add in a 5k assignment fee for me. The other option? We wholesale it and split the assignment fee. At this point, I had no idea where we would land price wise. Let alone if we were even getting the deal under contract.

After seeing it, Brandon said he thought it was a deal at 40-50k. The property was a large duplex, probably worth 150k + if it was fixed up. But it needed a lot. The roof needed to be replaced. The walls and ceiling had water damage. It needed plenty of cosmetic work. 40-50k sounded low, but it was necessary for this to be a great deal.

I called up the seller, explained we would love to have it for 40k but we know she’s looking for the best deal she can get. I confidently offered 50k (plus pay seller closing costs). She didn’t seem offended. She asked for a couple days to think about it. Two days later, she called me back and accepted.

Before making the offer, I had a hunch we could wholesale this deal for 65-70k. I didn’t expect to lock it up for 50k. Clearly she had some motivation. She was aware of the condition and probably had no intention on paying for repairs. She was looking for a quick out. We offered her that solution.

I ended up moving this deal for 80k (85k actually if you consider the agents 5k markup). Remember how I told Brandon we would split the assignment fee 50-50? I am a man of word.

Breakdown time: Contract price 50k. Assignment fee 80k. Our spread = 30k. 15k to me and 15k to Brandon. How much time and effort did Brandon put into this deal? Let’s call it 20 mins of drive time, 30 mins meeting with the seller and taking pictures. 10 minutes of phone time. That’s 1 hour. 15k for 1 hour of work.

This is why it’s smart to partner up when you first get started wholesaling real estate. Don’t try to do everything yourself. Leverage your connections, build a network. This will help you succeed much faster.

Want to get the step-by-step blueprint on how to get your first wholesale deal in 30 days or less? 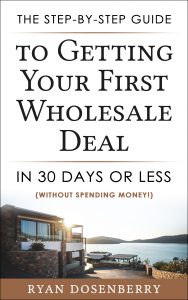 Related: How to Get Your First Wholesale Deal in a Week With No Money

About the author: Ryan hovers around a 10-20 handicap any given day. But the talent is there, no question.