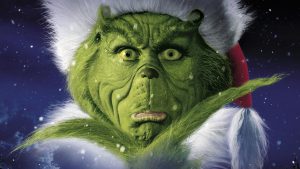 Grinch Quotes: “One man’s toxic waste is another man’s potpurri.“

“And they’ll feast, feast, feast, feast. They’ll eat their Who-Pudding and rare Who-Roast Beast. But that’s something I just cannot stand in the least. Oh, no. I’M SPEAKING IN RHYME!” -Grinch

“Am I just eating because I’m bored?“ -Grinch

“I am the Grinch that stole Christmas, and I’m… sorry.” -Grinch

“I’m all toasty inside.” -Grinch

“Saving you? Is that what you think I was doing? Wrong-o. I merely noticed that you’re improperly packaged, my dear.” -Grinch

“I guess I could use a little social interaction.” -Grinch

“If you utter so much as one syllable, I’LL HUNT YOU DOWN AND GUT YOU LIKE A FISH! If you’d like to fax me, press the star key.” -Grinch

“Kids today. So desensitized by movies and television.” -Grinch

“Stupid. Ugly. Out of date. This is ridiculous. If I can’t find something nice to wear I’m not going.“ -Grinch

“Give me that! Don’t you know you’re not supposed to take things that don’t belong to you? What’s the matter with you, you some kind of wild animal? Huh?” -Grinch

Related: Best Never Give Up Quotes

About the author: Ryan hovers around a 10-20 handicap any given day. But the talent is there, no question.